I am pleased to share FCAA’s 17th annual resource tracking report – Philanthropic Support to Address HIV/AIDS – announcing $651 million in HIV-related philanthropic funding disbursed in 2018. The bottom line, however, is that global philanthropic funding to fight the epidemic remained relatively flat, with only a 2% increase between 2017 and 2018. 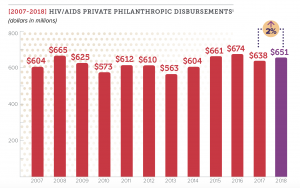 If we unpack this headline a bit further, we see that even this modest increase was driven by relatively few funders and belies the reality of the steady retreat from HIV by broader philanthropy. Over the course of six years, roughly 30 of the once leading funders have left or significantly decreased their investments in HIV, taking approximately $130 million in resources with them.

It is within this larger context that we must consider the data from this year’s report.

It’s impossible to read these facts without considering the current landscape of stagnating public resources and harmful policies. Just last week President Trump released his FY2021 budget, proposing drastic cuts to the Global Fund to Fight HIV, Tuberculosis and Malaria. While it also outlined significant increases in support for the Administration’s Ending the HIV Epidemic Initiative (EHE), that announcement is clouded by the stark contrast of other domestic U.S. policies that undermine the health and rights of the transgender and LGBTQI communities, women, and immigrants, among others.

Despite this, I believe our report also holds some good news. We were heartened to see, for example, a 6% increase in private HIV-related philanthropy for advocacy as well as a 38% increase in support for capacity building and leadership development. Combined, these strategies not only help to leverage philanthropic investment but are also critical to building the power and sustainability of organizations and movements. And that is exactly what is necessary to counter the influences that endanger key affected populations and regions – communities that rely on donor support to sustain public health.

While some of the grantmakers listed in this report don’t self-identify as an “HIV funder,” their work clearly recognizes the impact that the epidemic plays within the communities and the issues that they do fund.

We thank them and all of those included in this report for their leadership.

We encourage you to read the full report and allow the data to do what it is meant to: show us where our resources will make the most difference and spur us to action.

You can read the complete findings of the report here.