It’s Not Time To Celebrate Yet: How The Rise in HIV Funding Tells A Deeper Story

Philanthropic funding for HIV and AIDS reached the highest level to date in 2016. In a world where good news is hard to come by, the third straight year of increases in philanthropic funding should be cause to celebrate. However, it must be viewed in a larger context. 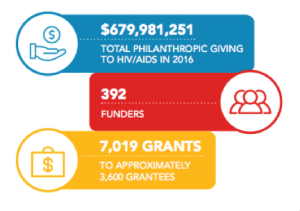 The 2016 increase belies a broader trend of decreases among leading HIV funders. The top twenty funders accounted for 87 percent of 2016 resources. In fact, without the two largest funders—the Bill & Melinda Gates Foundation and Gilead Sciences, which, together, represent more than half of all HIV/AIDS funding in 2016—total giving to HIV/AIDS among all other private funders would have decreased 5 percent compared with total funding in 2015.

A Decrease in Government Funding

At the same time, the vast majority of resources for HIV come from bilateral (government to government) donors, which are decreasing funding. Last year, the Henry J. Kaiser Family Foundation and UNAIDS reported the lowest level of donor government support for HIV/AIDS in low- and middle-income countries (LMICs) since 2010. While philanthropic resources for HIV/AIDS in LMICs increased by 11 percent between 2015 and 2016, funding from donor governments was, at the same time, on the decline. The reduction in donor government funding in LMICs alone was $511 million. When considering that the total amount of HIV/AIDS philanthropic funding was $680 million, it’s clear that there is an enormous gap not being filled.