“In our programs, policies and campaigns, we have sought to be pioneering, bold and honest. We have sometimes raised a few eyebrows along the way, but…if you’re not rabble-rousing and raising eyebrows, you’re probably not on the right track.”

For the inaugural edition of FCAA’s 30th anniversary blog series, it is only fitting that we highlight one of the very first corporations to get involved in the fight against HIV/AIDS – Levi Strauss & Co. We spoke with Executive Director of the Levi Strauss Foundation – and FCAA Board Member – Daniel Lee, recently. Together, we reflected on the organization’s contributions to the global HIV/AIDS response.

How did Levi Strauss originally join the fight against HIV and AIDS?

It began with caring about employees. In 1982, the Levi Strauss & Co. workforce in San Francisco and New York faced a mysterious, fatal disease. Robert D. Haas, COO at the time, and other leaders helped pass out leaflets at the company’s San Francisco headquarters in what may well have been the first corporate effort to educate employees about the virus.

In 1983, the Levi Strauss Foundation (LSF) made the first corporate donation in the fight against HIV/AIDS, providing resources to the Kaposi Sarcoma Clinic at San Francisco General Hospital. We continued to support the fight by spurring volunteerism, matching employee donations and making philanthropic grants.

Since that time, more than $70 million in social investments from the Company and Foundation have helped build several HIV/AIDS organizations from the ground up – first in the San Francisco Bay area and, over time, in more than 40 countries around the world.

What are some highlights of Levi Strauss’ long track record of commitment to fighting HIV/AIDS?

I am proud to say that Levi Strauss was a first-mover in the fight against the epidemic. Our core values — originality, empathy, integrity and courage — have truly shaped the organization’s human rights-focused response to the epidemic, in both our business practices and grant making.

For example, LSF was the first corporate foundation to support expanded access to sterile syringes, the only proven method of preventing HIV among intravenous drug users. It is a co-founder of the Syringe Access Fund, a collaborative initiative that also includes the Elton John AIDS Foundation, Open Society Foundations, Irene Diamond Fund, Tides Foundation, and AIDS United. In addition, 10 years ago, the Company made a commitment, through the Clinton Global Initiative, to provide comprehensive prevention, treatment and care to all employees, retirees, and dependents.

What are some of the biggest challenges facing the fight?

The global AIDS response has left key populations — including sex workers, people who inject drugs, transgender people, prisoners and gay men or other men who have sex with men — behind. An estimated 40-50 percent of all new infections are among people from key populations or their immediate partners. Reaching these deeply marginalized and criminalized groups is key to ending the AIDS epidemic.

Because private donors are subject to far fewer restrictions in what and where they are able to fund, our resources are crucial to reaching the most vulnerable. That which philanthropic donors allocate explicitly for advocacy is often the only funding available to address stigma and discrimination in laws, policies, and social settings; to build capacity for vulnerable groups affected by the disease; or to provide direct services.

Certainly, philanthropic funders, including Levi Strauss, have a history of providing critical support for people and issues that are socially marginalized or underfunded by governments. For example, in countries with growing economies — such as China, India, Russia and South Africa — international aid has been pulled out, yet stigma and discrimination persist. That is why LSF directs two-thirds internationally; we want to help bridge these gaps.

What is the role of private philanthropy in the fight against HIV and AIDS?

I often say that LSF got in early and stayed the course in the fight against HIV and AIDS. Giving back is at the core of Levi Strauss’ business, a pillar put in place by our founder 165 years ago. In short, philanthropy is not a trend for us. It’s an important part of our DNA.

We are also committed to fostering social change. We have a track record of taking stands on the most intransigent social issues of our time — including LGBT rights, the rights and well-being of apparel workers and racial justice — often long before these positions prove popular.

Staying true to this commitment requires viewing impact not only in terms of dollars committed and people directly affected, but also in how we can influence and bring individuals and institutions along – even when that process take several decades. So, in short, the role of private philanthropy goes well beyond the financial. We must stay committed and ensure that we have achieved our goal – ending AIDS as a public health threat. Despite funder fatigue, we are not yet there.

How can the lessons learned from the past 30 years be applied today?

In the early days of the HIV/AIDS epidemic, most thought of it as an issue affecting only men. Clearly, they were wrong. It is a danger facing women, men, adolescents and children. Further, it is not an issue in isolation. It is incumbent upon all of us to insist that HIV/AIDS is a gender issue, a health systems issue, a housing issue, an immigration issue, an elderly issue, and a social justice issue.

Just as stigma negatively affected those who faced that mysterious, fatal disease in San Francisco in 1983, there remain many people throughout the world who still are unable to access treatment and services due to fear of recrimination and even criminalization. So, we must continue to educate and reduce the stigma associated with HIV and AIDS.

As donors, in particular, we must be mindful of the areas that governments and aid organizations continue to neglect or abandon. Though our resources alone cannot bridge the gap, we can make strategic investments in these areas to achieve impact.

Now, more than ever, we must be committed advocates and ambassadors. It is a particularly challenging time, but if we’ve learned anything from the past 30 years, it is that we will not be intimidated by the odds against us. I am proud to be a part of an organization that has consistently shown progressive leadership in addressing HIV and AIDS. Levi Strauss and LSF have every intention of remaining on the frontline of this battle until the war is won. And we are grateful to have FCAA and all of its members as partners in this fight. 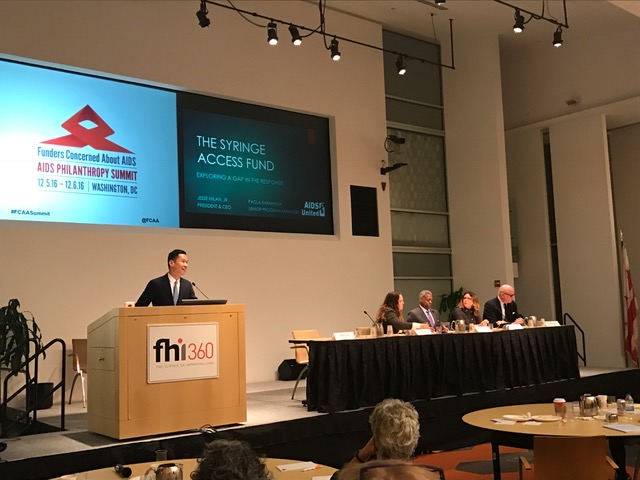